Before the project began, the dam Kostheim am Main consisted of a 3-section weir system including 2 locks. In 2006, the implementation planning of a hydropower plant was started. The new construction of the hydropower plant is located on the right bank of the existing dam Kostheim/Main. Flooding safety was an essential criterion for its design and construction height as flooding of the Mainau flood plains can occur in extreme flood water levels. Another special feature is the strongly fluctuating water level of the underwater influenced by the Rhine. This led to the necessity of adjusting the turbine speed via a variable-speed gearbox. This in turn allows a better utilization of the water supply, as fall height and flow through speed variability can be better adapted.

19m below the water level of the dammed Main, just 5m away from the shipping lane, the 60m long excavation pit was built. The overcut bored pile walls were made stable by internal stiffening with steel pipes and could be adapted by capsule presses to the respective ambient conditions of ground and air temperature, an economical system was implemented. Inflow and outflow were numerically optimized so as not to lose any drop height due to poor flow conditions. 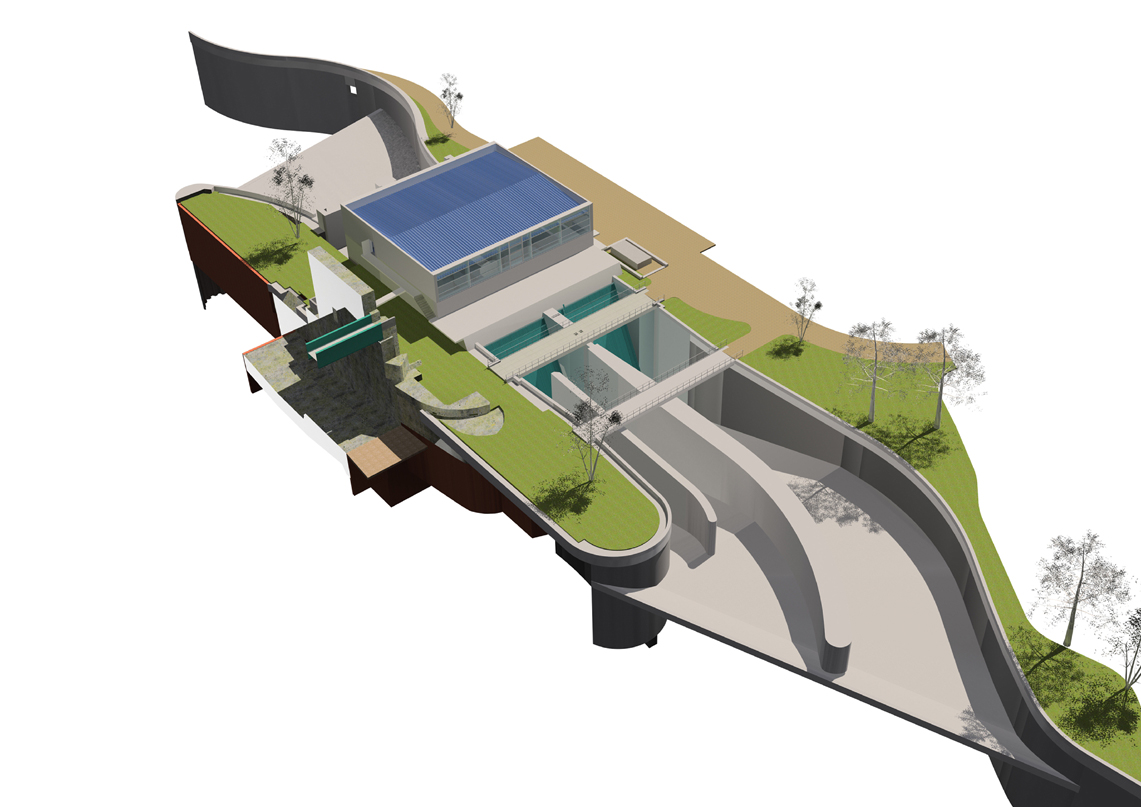 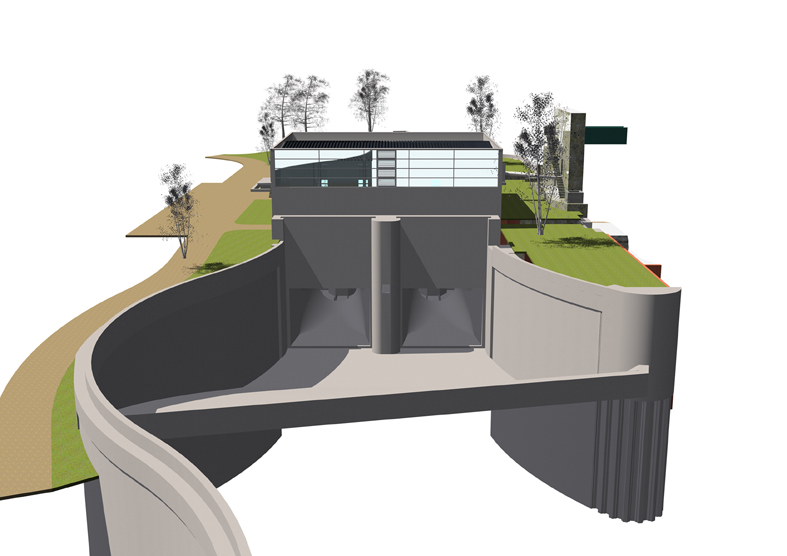 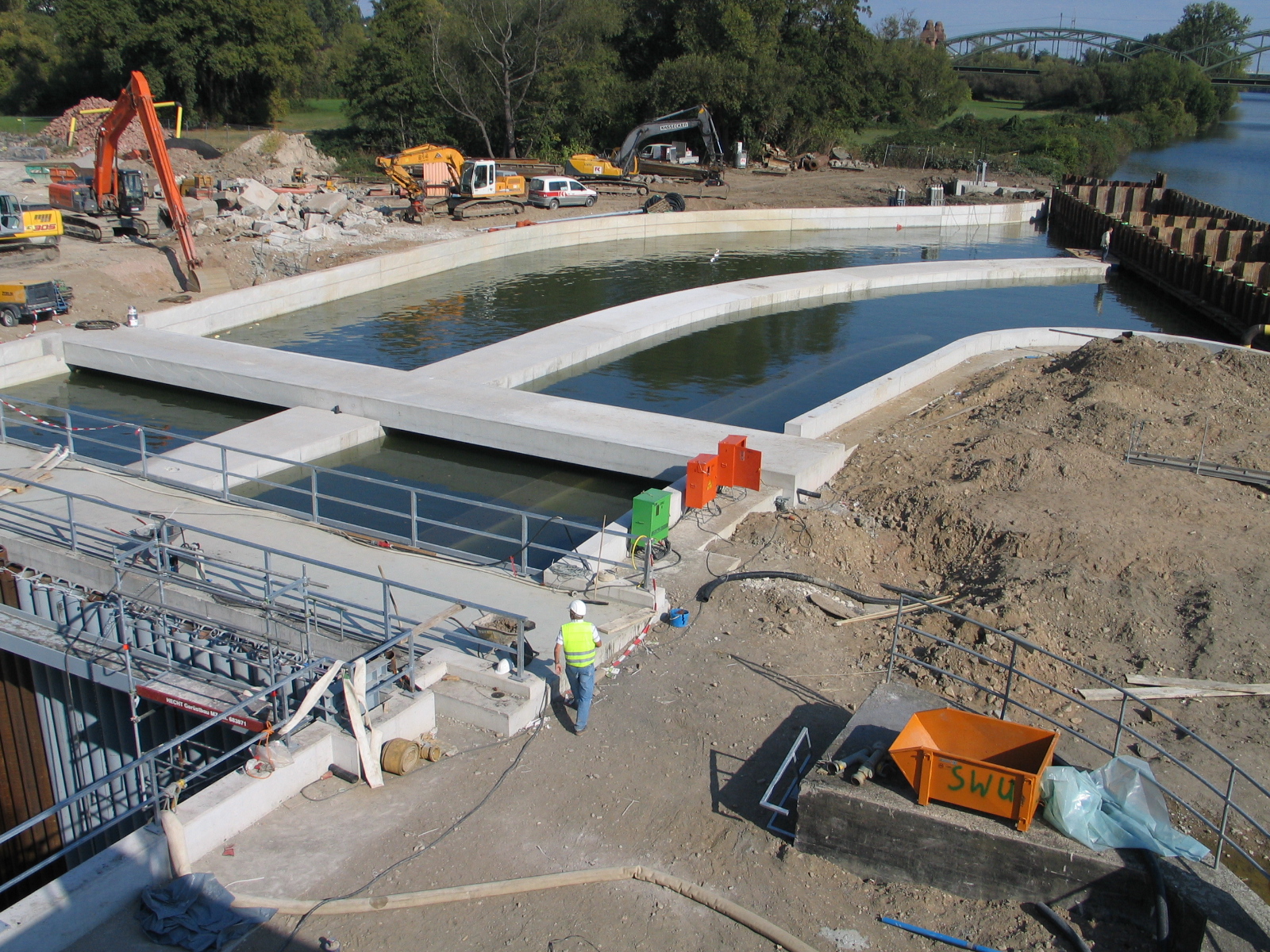 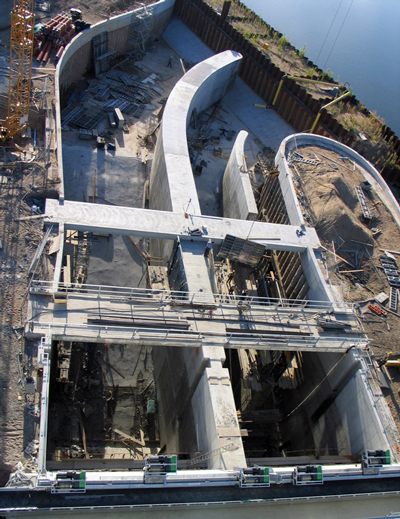 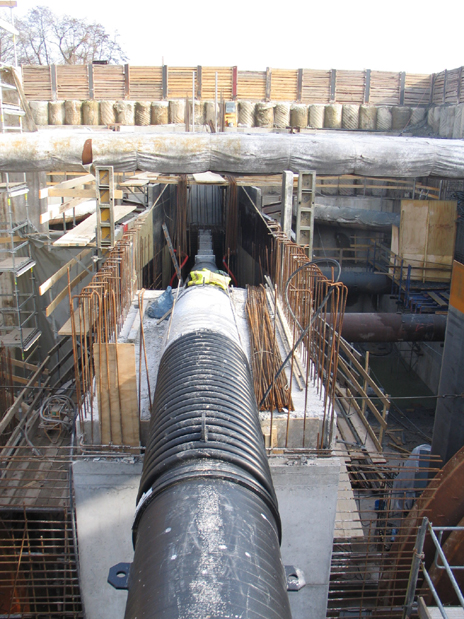 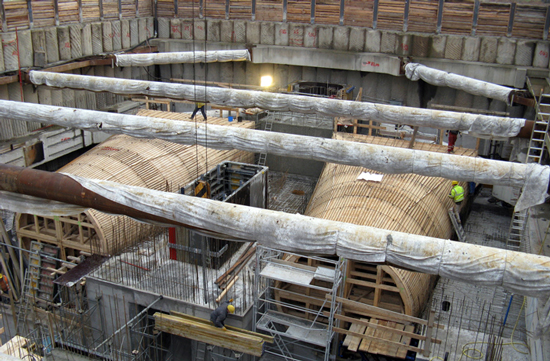 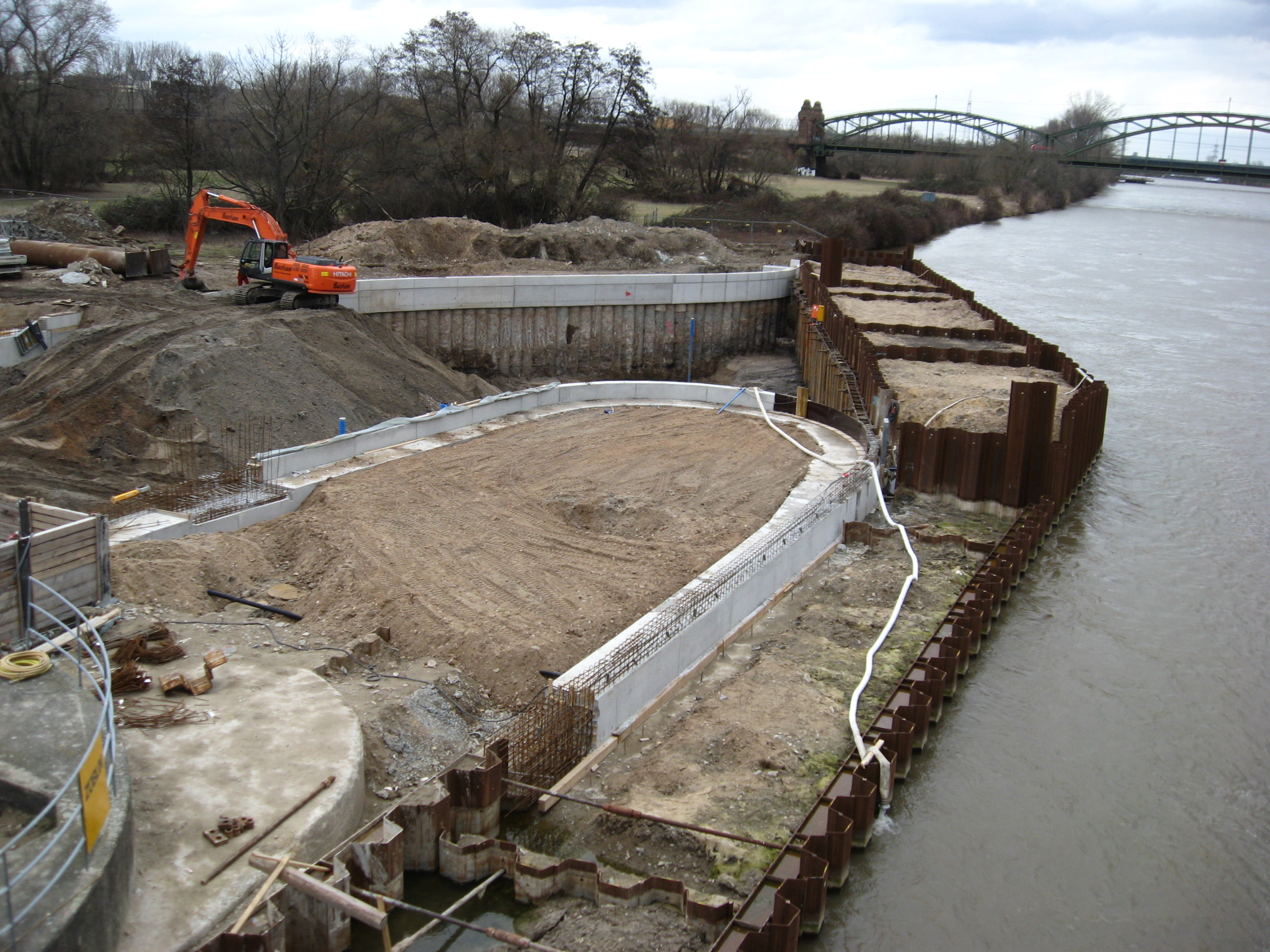 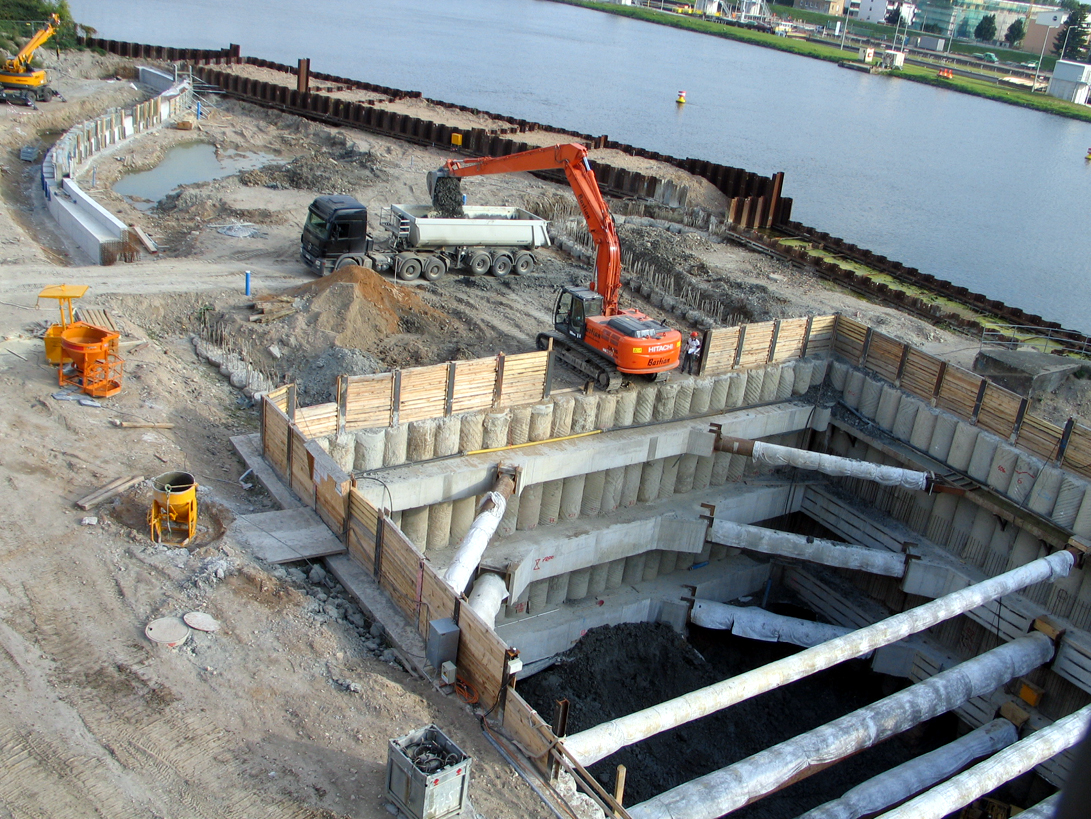 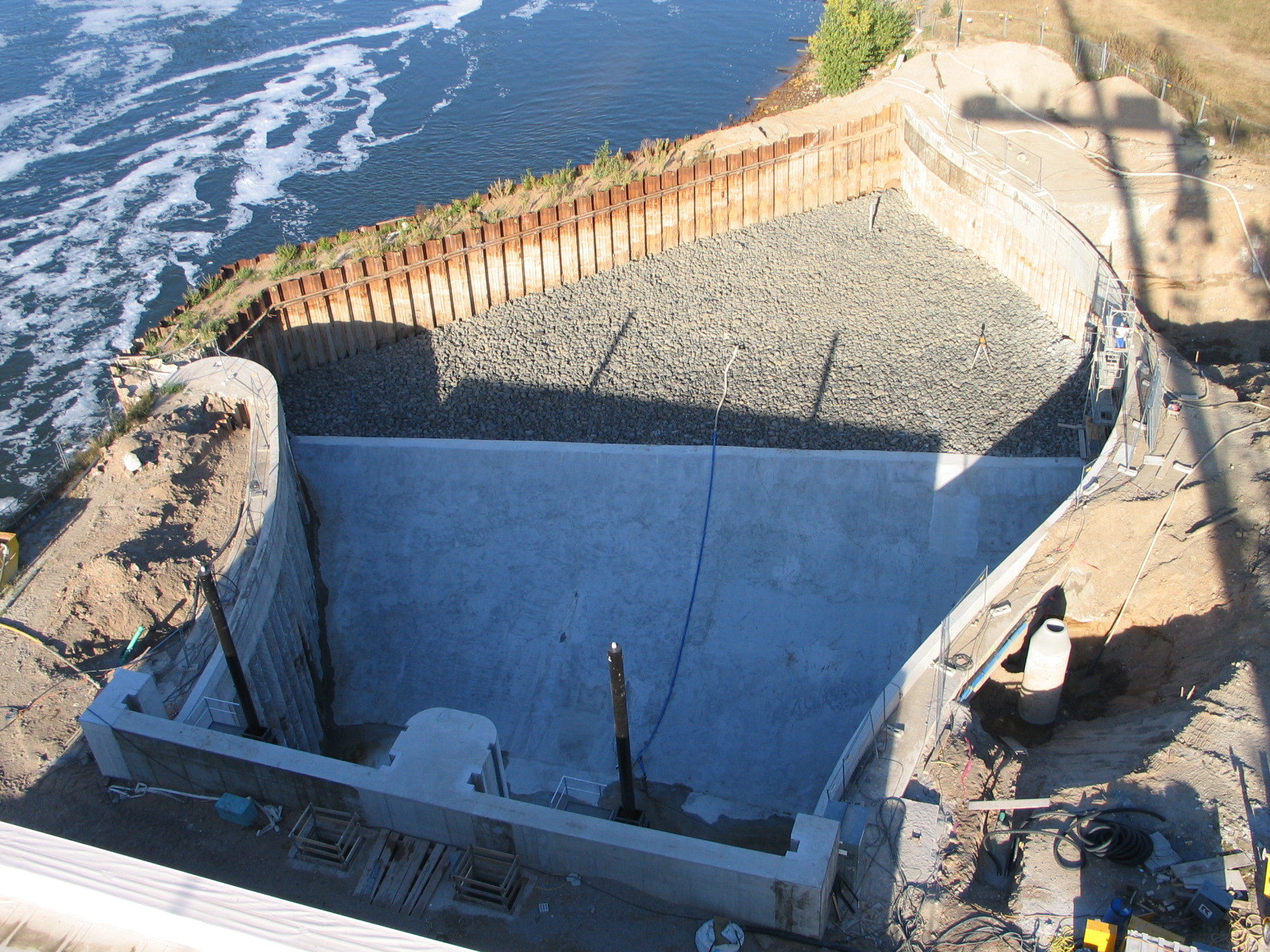 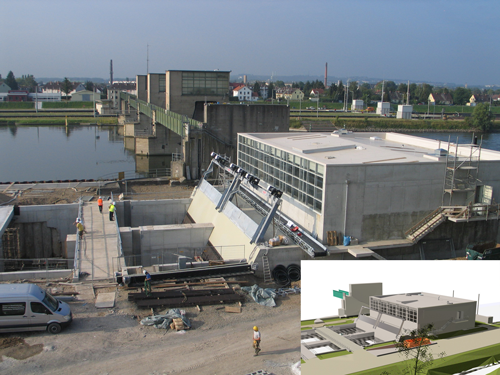 The slim powerhouse walls were made of reinforced concrete, using the dig-pit retaining walls (bored piles) as part of the structure. On top of the underground turbine house a super-structure was designed in steel and glass. This improved not only the light conditions, but also ensured an economical and fast execution. Optimization of the machine technology was another important component. The economic efficiency was significantly improved by the 2 x 2.45 MW output of a 10 kV generator linked with a variable speed increaser set, which raised the generation by 5%. The environmental requirements were stipulated insufficiently in the 2002 issued licence. Therefore considerable additional expenditures and efforts had to be made to ensure continuity through subsequent requirements and claims of the licensing authorities.